One of my first plein air paintings 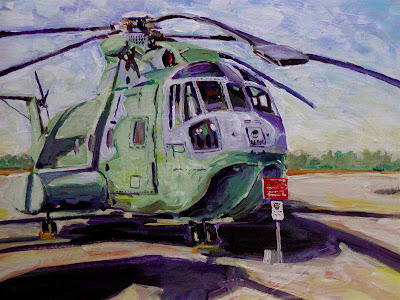 In November of 2006 I discovered a plein air painting group in Sacramento headed up at the time by a very accomplished painter, Terri Miura ( I took over the reins, I think, about April 2007). I have referred to him at least once or twice in previous posts, and he is a link on my blog. So... in Nov. of '06, I suggested that the group might want to paint out a the Sacramento Air Museum. They have all sorts of aircraft on display outside on the tarmac. I remember that Terri painted a little world war II trainer, and I tackled a helicopter. The helicopter you see here normally would NOT have been an aircraft that I would have wanted to paint except that a good friend of mine by the name of Paul Bianchini had done such a fab. job of drawing it about a year before, when he and I were there pencil sketching, that I wanted to challenge myself. I'm happy with the fact that the rendering of its shape in this painting came out pretty good. I met the challenge of doing the same foreshortened view that Paul did so masterfully! On the other hand, one can see that I struggled with the sky, foliage, tarmac, and cast shadow. Again, at this juncture in time, I was a plein air wannabe and was still figuring things out. Now, more than a year later, I still have much to figure out but at least I'm more comfortable and proficient at painting out doors.
But the main reason I'm posting this is to establish the date that I started my plein air journey and education. After all, one of the reasons why I'm blogging is to document it all and learn some things through self reflection. The other reason is for my college and workshop students to hopefully pick up a thing or two by reading portions.
So the date is now marked, and I'm happy about that...on with the journey!
Posted by David Lobenberg at 10:35 AM

wow!dude your painting of the chinnook helicopter is super cool ,awesome brotha! keep it up bro!jropxl

Hey Dave . . .Just checkin in. Nice job on the Helicopter! Isn't it great to look at the 'now work' and compare to the work where we started painting en plein air?

Keep it up, Dave. Your stuff really is unusual and well done!

I like the luscious painterly strokes on this helicopter. It makes for an interesting juxtaposition with the fighting helicopter. Is your plein air group open to "outsiders"? I'd love to visit the Sacto area to paint but having never been there (live in the East Bay) wouldn't know where to go and it would be fun to join in sometime if that's a possibility.

Jana: Thanks for the kind words! Sure, "outsiders" are certainly welcomed. We'll crank up again this spring. Shoot me an email, and I'll get you on our email list. I usually email the location and meeting time about a wk. in advance. Directions are provided, and I always have my cell phone in case someone gets lost.