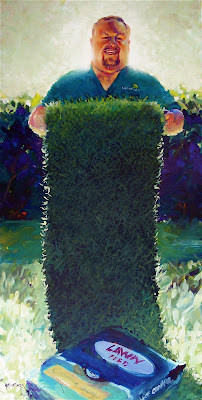 On my June 4 post of an acrylic portrait I was working on of a gentleman that owns a large landscaping company called "Lawnman", I received a lot of very complimentary comments. A few comments also included some suggestions and critiques. These people undoubtedly will roast in ever lasting hellfire for for such insensitive comments! :-) Suggestions made were, and I paraphrase, "he looks like he's standing at a podium" and "it looks like he's standing behind a tombstone", and most hurtful of all, "the flowers are distracting". My wife agreed with all of this and subsequently, our divorce papers will be finalized this Friday! :-) Getting back down to reality or as they use to say in jolly ole England, "brass tax", I actually agree with these comments. As you can see, I've discarded the flowers and made the roll of sod he is holding less formally straight up and down. I could paint his fingers in FRONT of the sod, but in reality he was holding onto the inside of the sod (his thumbs on the outside of the sod facing his body and his fingers in the hollow formed by the rolled sod at his chest). I'll being showing him the painting next week, so I think he will be comfortable with the way his hands have been painted. Any way...am I making some improvements here?
Posted by David Lobenberg at 4:56 PM

Thank you for sharing
This fabulous work with us
Good creations

I believe your critiquers were pretty darn smart about what to change and you were equally smart to make the changes--thanks for sharing the results. (I remember that once a critiquer commented to me... "be careful that the eyes line up--What?? " I was uber insulted because I thought I had hit a home run--but then I went back and noticed she was absolutely right--the eyes were slightly askew. What's with people that they are sometimes so right? haha. You did a superb job here. Five stars.

I was in favor of the flowers from the start but I can see now why some would think tombstone maybe because of them.
I agree that now with the bag showing the content title " lawn feed " makes more sense too.
He looks like he has more of a tan now which is nice. I likes his mouth more in the lighter version but this is nitpicking.
It's a fabulous piece.

it's such a cleaver unusual painting. I like both versions myself.

Howdy, SKIZO in far off Portugal! Thank you for your comment.

Thanks for the 5 stars, Celeste! We need to listen to ourselves as artists...but...not all the time.

I think, Dominique, that my bag of "lawn feed" really helps to "seal the deal" as the saying goes. Gladya like my second try.

Fay, Was I clever or simple minded in my approach here? Sometimes simple mindedness is the key to cleverness! :-)

Well doggone it, Barbara, I'm glad you don't think the second iteration is worse than the first! Art ain't always easy what with critics and iterations, but I do believe I can now close my ears and eyes and finish up with this sucker.

Well damn Autumn, you and Barbara are like minded in liking both iterations That means I can complete iteration# 2!