On My Easel and Behind My Easel 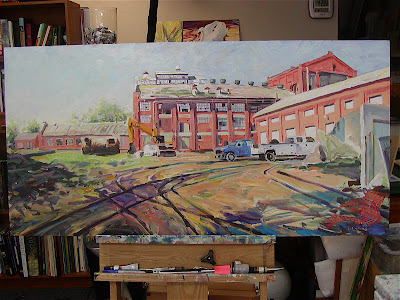 I took on a botched illustration job that a designer friend of mine had farmed out. The illustrator refused to take any art direction. That is not the hallmark of a professional illustrator! I asked if I could have the botched illustration. It was on a large piece of masonite, I gessoed the other side and did this painting of a decaying sugar beet plant near Sacramento.
You can see several interesting items on the easel just below the painting. To the right of the pink post-a-note is a plastic canister containing a roll of exposed and undeveloped 35mm film from about eight years ago. I have not a clue what's on the film, and if I procrastinate much longer, I may never know! Who will be left to process film in the digital age? The post-a -note has a "to do" written on it and that I have procrastinated on and will most likely never get done. The paint tubes to the right and left are not really paint tubes. Open their caps and a ball point pen tip is revealed! The tubes are even dented like real paint tubes. A devilishly inventive way for one's thumb and finger to ergonomically hold the pen! Got these from an art store catalog. Poking up over the left side of my painting is a three foot glass vase holding hundreds of spent watercolor paint tubes. Yes, when I finish off a tube, it gets tossed into the vase...kinda like making a rubber band ball...how cool is that!
A wee glimpse of my working environment.
Posted by David Lobenberg at 10:42 AM

This is a very cool looking work. A lot of effort but it is paying off.

Hi David! Great painting! :) I was wondering, for the orange plastic construction fence in the lower right hand corner, did you paint that by hand or did you use a piece of mesh fabric for the design?

Good way to recycle.
The painting looks great.
Isn't it funny the things people wont throw out? You have your used tubes. I never throw out an old brush. I have cans of them. You never know, one day I may not be able to afford new ones and I'll bring some back to life. Or I'll make a fence.

Effort?! No way, Onpainting! All the art I do is a piece of cake! No struggling whatsoever. You trust me, don't you?

Amber: I first painted a SOLID orange shape, let it dry, and then painted in the negative spaces.

It sounds like with the number of brushes you are saving, Frank, you could do both! It's good to get some positive comments. I've worked so hard on this painting that I can't objectively judge it very well. I think we all can have that problem.

very good looking work! No shortage of challenges on this one.

that is big!good you have those dark shapes in the foreground leading in,i feel i can step right in.

i never throw away tubes and old brushes...no idea why...

So much more than a glimpse!
I'm impressed!
Quel talent, bravo!

Thanks Marco...always interested in your opinion... good or bad (constructive). Thanks!

Alina: Thanks. Hey, you are a very talented animation and sketch artist. I'm definitely going to explore your web and blog sites some more. As you probably know, I'm a fellow Bruin, except I go my Master's degree shortly after the last ice age!

Rob: Maybe being an artist comes with a wee bit of pack rat syndrome!