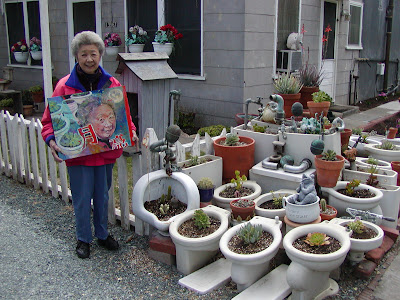 A couple years back, I did a series of acrylic paintings representing the departed spirits of the Chinese that lived in a tiny all-chinese town on the California delta. The town's name is Locke. It's still there in a beautiful, decrepit state often visited by bikers, tourists, and artists (google Locke, Calif.) One of the few chinese left living there from it's glory days was a woman who befriended me and told me many a story about the town, Her name was Connie King, a feisty lady who managed to get the county to replace the town's aged sewer system so that it could continue to survive as a testament to the Chinese who immigrated there and of course to "Gold Mountain" (California). She is shown here holding a painting of her and her memorial chinese toilet garden with the toilets that many of the departed chinese immigrants sat on before the new sewer system was installed. She was also instrumental in getting the state to restore some of the town's buildings as historical monuments and also getting the state to fundl a monument on the town green commemorating the Chinese who called Locke, California, and the United States of America their home. Connie peacefully died in her sleep a few months ago. It was my honor to know her.
Posted by David Lobenberg at 9:14 PM

Getting to meet Connie, hear her amazing stories and seeing her awesome toilet garden was an experience I will never forget of that plein air summer. I'm very thankful for her welcoming us to her home, her town, and thankful to you for that experience.

Such a touching story! And I love how you show it in the painting she is holding!

She sounds like an amazing woman. Great photo. Thanks for telling us about her.

Yes, Amber, that was a special day. Glad you enjoyed that day and my class. I always enjoy you being in my classes and seeing your artistic talent blossom!

I've always had a special affinity for Locke. It captured my heart the first time I visited as a child. And since, I make a point to stop by when I am in the area. In fact I was there last weekend and realized Mrs. King passed on in 2009. I was disheartened because most of her toilets have been dismantled and moved throughout the town. Thank you for your loving tribute. I am glad I came across it.

She was a lovely, generous, soulful pistol-packin- mama that I had the good fortune to be acquainted with.