Things will be looking up for the Sacramento Kings NBA basketball team!! 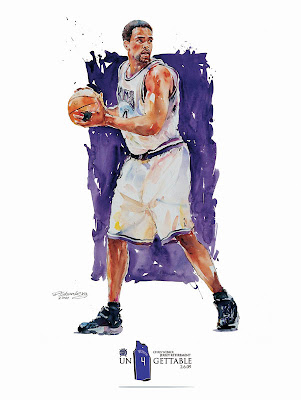 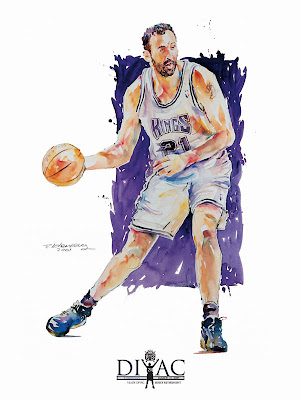 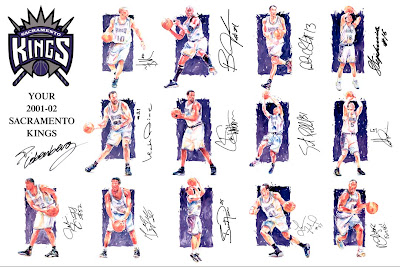 (POSTER INCLUDED HERE AND JERSEY RETIREMENT POSTERS TO COME SHORTLY) The NBA season of 2001-02. Whatta year that was for the Sacramento Kings! Each and every home game was sold out with Arco arena jam packed with screaming, foot stamping, thunder stick clapping maniacs. The Kings were on a roll. Their best season ever. The team was one of the media's darlings...world wide even! They were a scrappy, fun loving team who just seemed to get better and better. They made it all the way to the play offs and almost to the finals until the last game of the series when they played against those damnable LA Lakers and the refs. miscalled a critical play. Never- the- less, what a season, and I was picked as the artist for that season's poster! It was mailed to about 8000 season ticket holders as a thank you gift from "Your Sacramento Kings!". Unfortunately, management has a policy of using a different artist each year with the result that the Sacramento Kings have gotten so bad that this season they are at their worst ever... and ... they need me! They can't switch artists if they want a winning season! Call me an egocentric, wacky, or a krank, but I know this is why they are playing so poorly. All may not be lost, however, for I have been called back. Management asked if they could reproduce two of the water color paintings that were origionally on the 2001-02 poster. In Feb., the team is retiring Chris Webber's jersey during half time, and in March, the same with Vladi Divac's jersey. At each game, the fan's ( alas, the home games are far from sold out) will be given a limited edition print as they enter the arena. One print for C. Webber's night and one for Divac's night. It is also a possibility that I will be commissioned to create the art for the first poster ever for their women's team, the Sacramento Monarch's. Things will be looking up, I'm sure! By the way, each player on the poster was a full sheet (22"X30") watercolor.
Posted by David Lobenberg at 6:54 PM

It's about time they recognize the "good luck charm" they have in you. Nice way to have your art spread around! I'm looking forward to seeing the image.

If I'm ever a team owner, you will be the first artist I call.

That may be a long shot, but hey!!! Life is full of surprises.

Thanks Mryna. Hope to have the Chris Webber poster soon.

In these hard times, it's good to know that I may be employed by you in the event you acquire a professional sports team!

Super work. I just love the action and the background adds to the feeling
of movement.

Barbara
Yep. Not in my life plan at the moment, but then neither was blogging 14 months ago, and so much has happened.

Owning a team so you can paint it,
here we come!!!

Beautiful watercolour illos. Don't see enough of that sort of thing these days.

They finally wised up and called you? Good for them. ;-)

I hope the Kings wake up and realize they lost the best artist they have ever had . . .whether or not he is a wacky Krank! ;-)

I really DIG these, Dave. Youda Man! (no joke. YOu really ARE da man!)

Another comment . . .Y'gotta tell Milind I am toooo bizzzy right now with a bunch of other stuff that is keeping me from painting what I want . . . . I am prepping for a biiiig demo on the east coast.

Milind, you and I and the others will have to play later, I'm afraid.

Thanks, Mike! With regards to you not being part of the paint-off with me and Milind...screw you!!!...only kidding!!!...ya gotta do what ya gotta to do...take a paint-off rain check, and we'll catcha next time.

Excellent series David - hell of a nice way to be rewarded and recognized. The action is all there in color and lines -- impact!

These are very neat paintings, David. I think you should be paid as another player on the team.

Those are wonderful watercolors,sport illustrations.
I am sure you will do just as good as you used to paint few years back.austa
The bike..I was trying two more versions ..halfway through..will post whatever I have done tomorow
hopefully.

Yep, sure would like that level of income, Onpainting.

Looking forward to seeing what I know will be wonderful paintings, Milind.

Always thoroughly impressed with your style and range!! These are excellent. Thank goodness they recognize talent when they see it..:)

Mr. Lodenberg - I sat near you at the game honoring Chris Webber and took photos. I just wanted to let you know that I have been working very long hours and not even had the chance to check out the photos. I will do so in the next few days. If any of the photos turned out at all, I will let you know. I need to know if you want me to e-mail them to you or put them on a CD. I have been looking all over for the original poster from the 2000-2001 season. No luck. Look forward to hearing from you. PJ